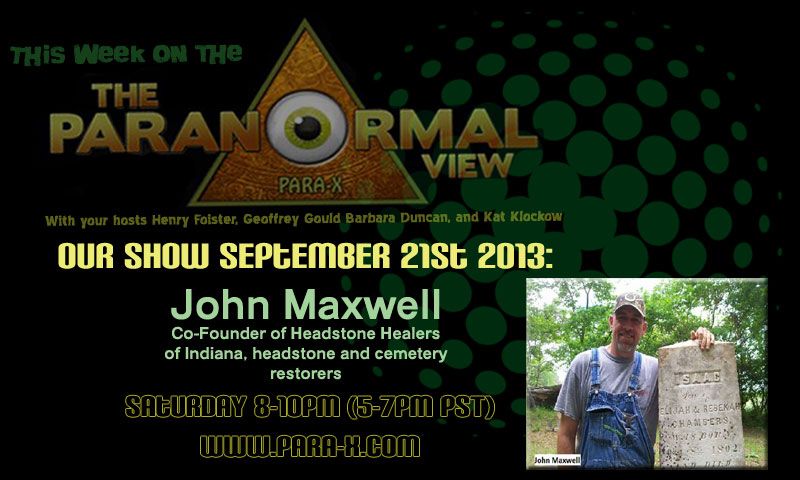 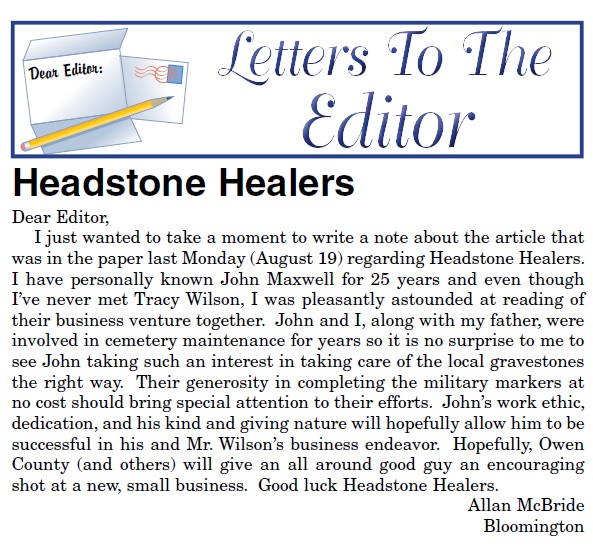 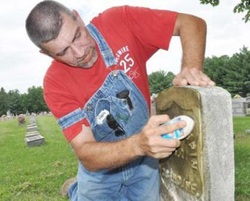 A pair of Spencer men have undertaken a noble mission to restore the grave markers of Owen County’s forgotten military heros.

John Maxwell and Tracy Wilson of Headstone Healers of Indiana are donating their time and know-how to restore military grave markers at no cost, though readily welcome donations to help fund their cause.

“I was looking at the website Findagrave.com. I was doing a lot of stuff on there, going to these cemeteries, taking pictures of grave-sites and noticed that a lot of the military headstones were in bad shape. I thought, ‘These guys don’t have any family left, something should be done about this because a lot of their stones are in really bad shape.’ So I just started doing them. When I was working on them at the old Riverside cemetery, I ended up locating 71 different names that the county never had recorded, which really got me going on it. Then I got with Tracy (Wilson) and he partnered with me; the overall plan is to always do the military stones for free.”

John Maxwell of Spencer scrubs clean the headstone of Union Civil War soldier Daniel Maupin at Riverside Cemetery in Spencer. (Staff Photo) To generate funds for their efforts, the Headstone Healers also offer their services to the families of those buried in area cemeteries.

“If we can get a family to pay us $10 to clean their family member’s headstone, that money goes toward buying the materials we need to do all the others for free,” Maxwell explained.

He and Wilson have also discovered several ‘forgotten’ cemeteries.

“I think our best one was Alexander Cemetery. Up until 2000, a farmer could, for agricultural purposes, remove the stones and plow right through. The county thought it was in a field and assumed that’s what had happened,” Maxwell said. “It took us two or three months, but we finally located it in a heavily wooded area across State Road 46 from where the county thought it was. It’s in amazing shape.”

Pictured above are the before and after images of the headstone of Captain James E. Hyden, who served with the 59th Indiana Infantry during the Civil War. The headstone was restored by John Maxwell and Tracy Wilson of the Headstone Healers of Indiana. (Courtesy Photo) To this point, Maxwell said the pair have restored more than 50 headstones in old Riverside, or what is now known as Laurimore Cemetery, many of which he said were broken or had fallen over.

“We’ve already ventured out and done some other places like Little Mount in Gosport and Asher Cemetery; there are 27 stones missing, everyone who was named Asher,” he noted.

The pair have also attended seminars on restoration and utilize the same product to clean headstones, D-2, as is used in Arlington National Cemetery.

It’s amazing stuff, it will bring the stone back to its original white again,” Maxwell added. “I’d really like to get a 4-H group or one of the Boy Scout or Girl Scout troops involved... it would be a great community service project.”

The relatively simple process takes just minutes and begins by first digging up and removing the stone from the ground. Maxwell said stones such as those used to mark the graves of Union Civil War soldiers typically sink into the soil and should be about 16 to 18 inches above the ground from the bottom of the shield.

After removing the stone from the ground, the pair ensure the ground is level once again, leveling the stone back before scrubbing and rinsing it clean.

“I just saw a need and when I talked with Tracy, he agreed with me and it just grew from there. It’s a labor of love, I’m out here three or four nights a week doing this,” Maxwell said. “I just got most of the Civil War stones finished and now we’re working on some flat markers.”

With the cleaning solution alone costing the pair $52 a gallon, which will clean approximately 30 headstones, Maxwell and Wilson will gladly accept donations.

“Township trustees just don’t have the money; they have money to mow (the cemeteries), but that’s about it,” Maxwell said. “I haven’t ran into a trustee yet who hasn’t welcomed what we’re doing.”

The Headstone Healers of Indiana can be found online at Headstonehealersofindiana. weebly.com, on Facebook, or by contacting Maxwell at 812-821-1253 or Wilson at 317-445-1679.